At the North Qld projects Anchor has recently discovered, an epithermal gold-silver system at the old Fluorspar fluorite mine. Epithermal textured quartz, confirmed by petrology, containing strongly anomalous gold extends over a strike length of >2 km, and possibly up to 3 km. Deposits having this style of epithermal gold mineralisation are renowned for their high grade.

In addition, at the Doolan Creek prospect, a greisen-hosted, polymetallic gold-silver-copper-lead granite-related mineral system has been confirmed by detailed rock chip sampling and petrology. The mineral system may extend under shallow soil cover and further work is required to define the full extent of this alteration-sulphide system.

Both Fluorspar and Doolan Creek targets are indicative of large mineral systems.

The Aspiring and adjacent Walsh River tenements are located in the Chillagoe mining district, which forms part of the larger Hodgkinson Province in Far North Qld.

In late 2016 low sulphidation epithermal gold-silver mineralisation was discovered by Anchor at the Fluorspar Group of workings, and granite-related gold-silver-copper-lead mineralisation was verified in a greisen-sulphide alteration zone and peripheral polymetallic veins at Doolan Creek.

The Fluorspar Group workings and Doolan Creek greisen-sulphide alteration zone are within EPM 25958 (Walsh River) and located 33 km apart. Part of the Doolan Creek mineral system is interpreted to extend into the adjoining EPM 19447 (Aspiring) tenement. The prospects are genetically and geochemically different.

At the Fluorspar Group of workings vein quartz, invariably displaying a lattice-bladed texture, contains low levels of gold consistently assaying 0.1 to 1.0g/t Au, and up to 6.0g/t Au, (average 0.33g/t Au in 65 samples) in rock chip samples over a strike length of >2 km along a northeast trending sub-vertical regional fault (Perseverance Fault) reported to be up to 2 metres wide in the old workings. Silver values range from 0.1g/t to 62g/t with numerous values assaying >5g/t Ag (average 5.9g/t Ag in 65 rock chip samples). The quartz is often associated with fluorite in the main vein and sometimes stibnite in other secondary veins emplaced along subsidiary sub-parallel structures to the main vein. The Perseverance Fault is interpreted to continue to the northeast and southwest beyond the extent of the current sampling program and is likely to be at least 3 km long.

Textures in quartz are typical of formation in an epithermal environment and have been confirmed by petrology. Textures include lattice (pseudomorphic replacement of coarse bladed carbonate), plumose, encrustation, quartz replacing chalcedony, growth zoning in coarser quartz grains and crystals, and sub-radiating textures. Multiple veining events have been recognized including cross cutting quartz and separate stibnite veins.

Typical quartz pseudomorphing coarse blades of carbonate (probably calcite) forming a lattice bladed texture. These textures are interpreted as indicative of the chalcedonic, vapour phase zone at, or near, the top of an epithermal vein system.

The Doolan Creek greisen is located towards the centre of the Doolan Creek Cauldron, a structure rimmed by sub-aerial ignimbrites and intruded by the Bungabilly Granite. Felsic volcanic rocks and related granitoids associated with caldera collapse structures or ring complexes have long been recognised as prospective areas for a variety of mineral deposits, including greisen, skarn, stockwork and veins.

The Doolan Creek greisen and vein geochemistry strongly supports a granite-related metal association. The greisen zone may be linked to a high level, shallowly buried cupola, temporally and genetically related to the intrusion of the late stage Bungabilly Granite, or possibly the nearby, but temporally later, Long Gully Granite. This geological setting is considered to offer potential for the development of large mineral deposits.

Results from the Fluorspar Group of workings and Doolan Creek are considered very encouraging. 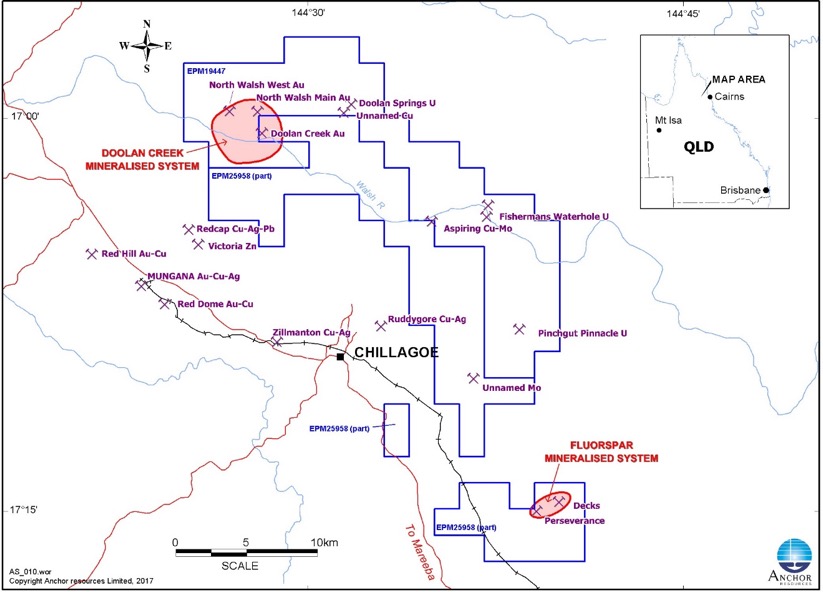 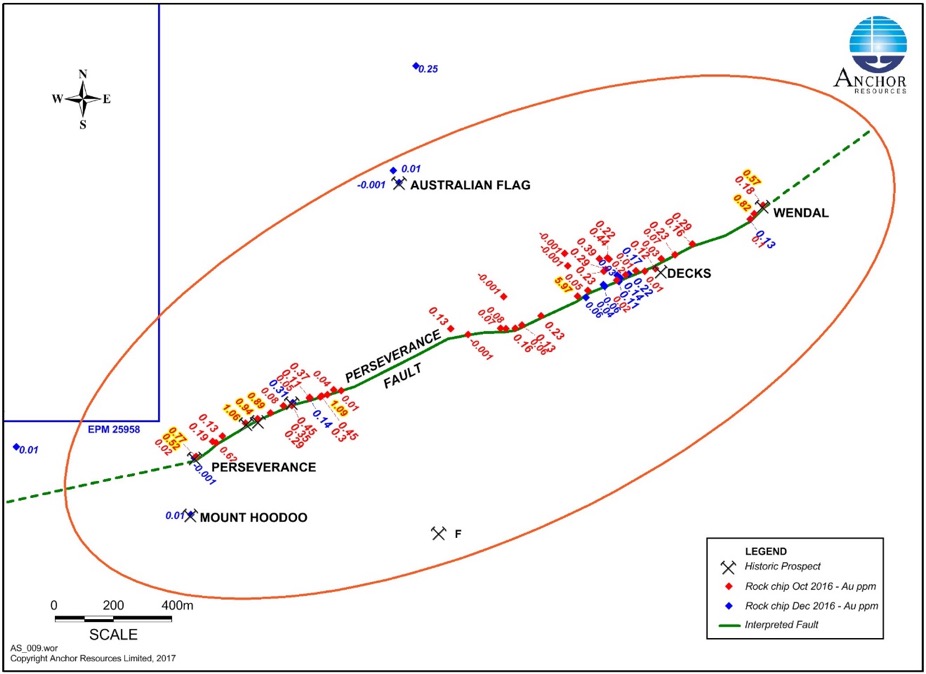 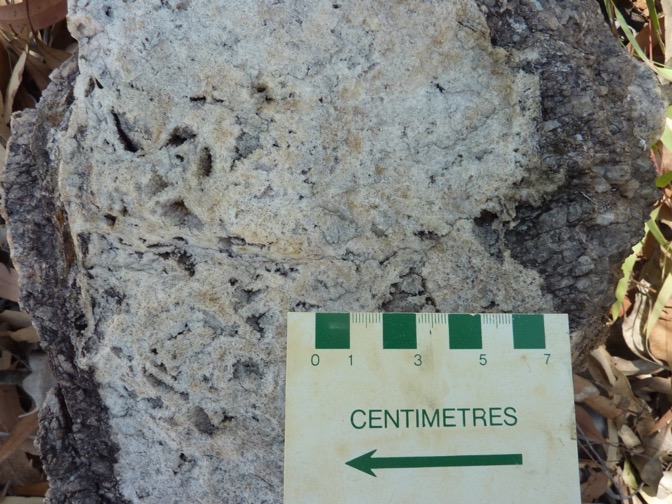 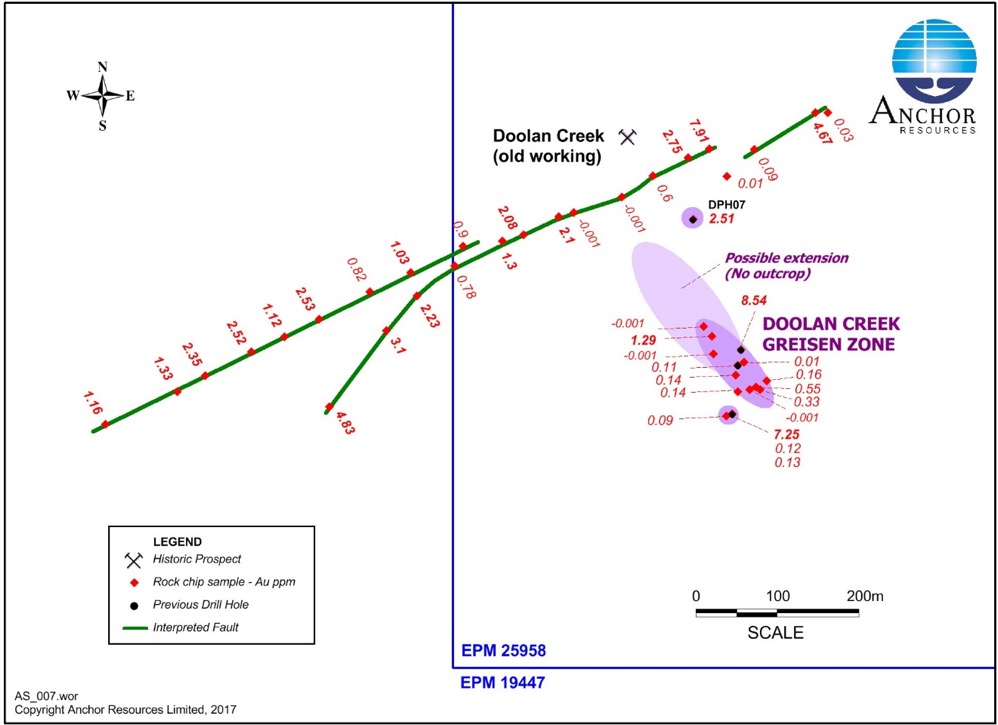 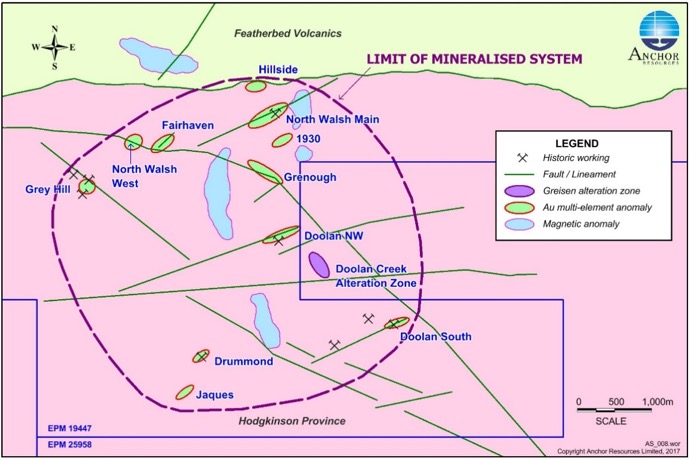