The Gemini project, in central west NSW, is a Cobar-style base metals target. The Blue Mountain prospect is the most advanced prospect in the Gemini project. It is near drill ready with the objective of discovering a Cobar-style copper-lead-zinc deposit. These types of deposits are high metal-bearing mineral systems and viable under a wide range of economic conditions. The next stage of exploration is a geophysical (electromagnetic/EM) survey over the prospect to better define drill targets within a 2.2 km strong lead and copper geochemical bedrock anomaly.

The Gemini project covers a prospective, underexplored area of the Cobar Basin and includes the Blue Mountain base metal (Zn-Pb-Cu) prospect which Anchor has identified as a Cobar-style base metals prospect.

The nearby Wagga Tank Cu-Pb-Zn-Au-Ag massive sulphide prospect owned by Peel Mining is located 8 km southwest of Blue Mountain and the Mallee Bull copper-silver-gold deposit is located 40 km to the northeast along the same lineament. Anchor’s project area is considered prospective for Cobar-type base metal deposits.

The Cobar Basin has a long history of ongoing mineral discoveries extending from 1869 up to recent times confirming its potential as a world class mineral province prospective for major new discoveries. The geometry of many deposits has made them challenging targets for exploration. However as the understanding of these deposits increases and technology advances new opportunities are created.

Based on Anchor’s compilation of previous explorers’ data, the Blue Mountain zinc-lead-copper prospect has a strong multi-element geochemical signature extending over a strike length of 2,200 metres defined by historic bottom hole RAB drilling.

The anomalous multi-element Zn-Pb-Cu geochemistry, large linear anomaly footprint, sphalerite-galena-chalcopyrite association in drill core, structurally controlled lensoidal geometry of the mineralisation intersected in drilling, and interpreted structural architecture of the Blue Mountain zinc-lead-copper prospect, has many similarities to other Cobar-type deposits, including the major producing CSA mine at Cobar. The best drill intersection is reported from diamond core hole BMDD001 with 24 metres @ 1.3% Zn and 0.4% Pb from 146.0 m. Intersections of this grade and width can be expected above an ore lode at depth in the Cobar-type conceptual model. Furthermore, many historic drill holes intersected multiple lead-zinc-copper intersections suggesting multiple mineralised fluid channelways are present at Blue Mountain. Experience on the Cobar field shows that once these mineralised channelways and structures have been identified then they need to be drilled down plunge to follow the mineralisation at depth.

Cobar-type deposits are polymetallic massive sulphide deposits and are electrically conductive making them ideal targets for electromagnetic surveying. Electromagnetic surveys provide high definition mapping of both the electrical and magnetic properties of the earth. The technique has been progressively refined to achieve high spatial definition and/or deep ground penetration where it is possible to detect a large conductive target at depths approaching 1,000 metres or more. The technique has the ability to accurately define the location of the target, if present, and is used extensively, with considerable success, for this reason. Drilling to test the conductors would follow. 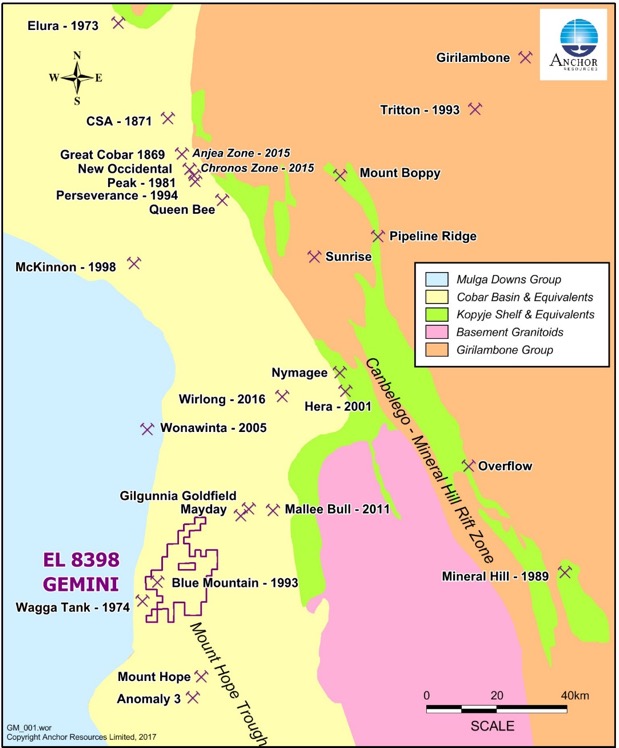 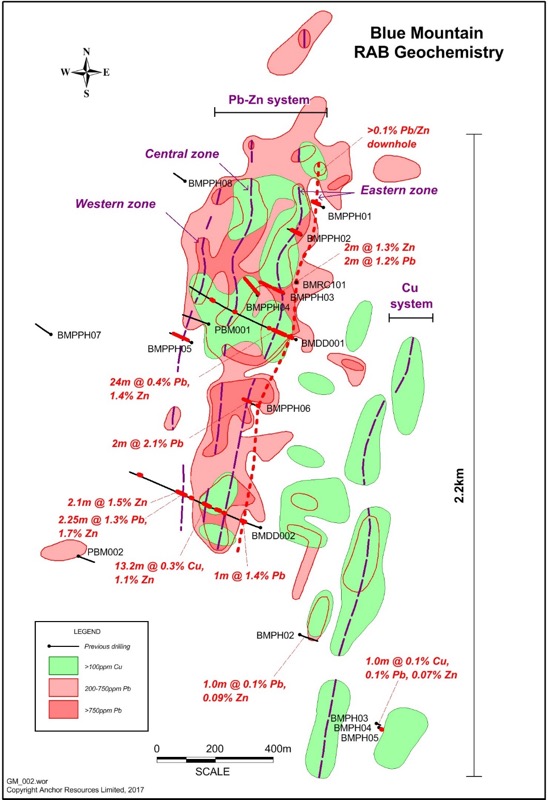