The Cobar Basin has a long history of mineral discoveries extending from 1869 to 2017 confirming its potential as a world class mineral province prospective for major new discoveries. Cobar-style deposits are high grade, polymetallic mineral systems, viable under a wide range of economic conditions. Anchor is an active explorer in the southern and central Cobar Basin where it has a substantial tenement holding of approximately 1,537 km2, the third largest in this mineral province.

Anchor’s Cobar Basin project covers part of a prospective, underexplored area of the Cobar Basin where a number of significant recent polymetallic deposit discoveries have been reported. Current exploration is focussed on EL 8398 Gemini where two significant targets have been identified for further immediate work and a number of others are being assessed. An Induced Polarization (IP) survey is underway and will cover Blue Mountain prospect the recently discovered Jaguar prospect, and other prospects. The objective of these surveys is to investigate selected anomalies at depth and define targets for drill testing.

The most advanced target is Blue Mountain base metal (Zn-Pb-Cu) prospect. Blue Mountain is a strong multi-element geochemical anomaly extending over a strike length of 2,200 metres defined by historic bottom hole RAB drilling. In two core holes completed in 1992 the best drill intersection is reported from BMDD001 with an intercept of 24 metres @ 1.3% Zn and 0.4% Pb from 146.0 m. Intersections of this grade and width can be expected above, or along strike, of an ore lode in the Cobar-type conceptual exploration model. There are also several historic shallow percussion drill holes similar intercepts of low grade lead-zinc-copper mineralisation suggesting numerous mineralised fluid channelways are present at Blue Mountain.

At Blue Mountain the extensive anomaly footprint, coincident multi-element Cu-Pb-Zn geochemistry, sphalerite-galena-chalcopyrite base metal mineralisation in historic drill core, structurally controlled lensoidal geometry of the mineralisation intersected in drilling, and interpreted structural architecture of the Blue Mountain Zn-Pb-Cu prospect, has many similarities to other Cobar-type deposits, including the major producing CSA mine at Cobar. 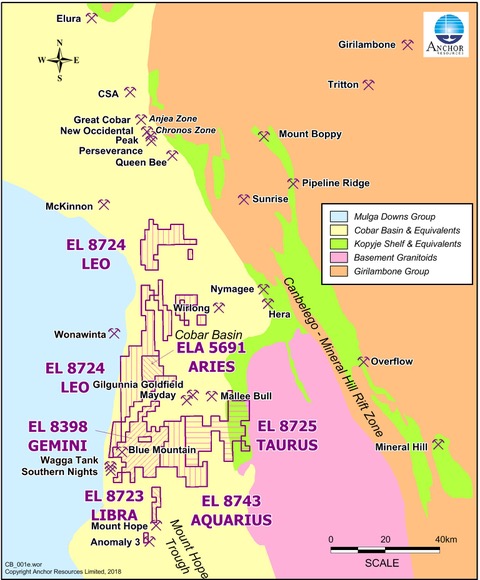